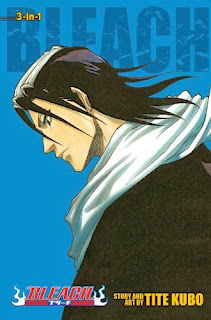 "Rukia Kuchiki, the ex-Soul Reaper responsible for Ichigo's transformation, is on the lam. Her brethren at the Soul Society are quite displeased with the fact that she transferred the powers of a Soul Reaper to a human and have dispatched two of their strongest agents to neutralize the situation. Their mission is twofold: to return Rukia to the Soul Society so that she may pay for her crime and to deal with Ichigo--permanently. But an unlikely third party is standing in their way: Uryû Ishida, the Quincy!"

Vol.7: The Broken Coda - The two new Soul Reapers battle on with Ichigo and he is left for dead but Hat and Clogs comes to get him and sets about teaching him to become a Soul Reaper in his own right without the aid of Rukia's powers.  This is mainly what this volume is about and is quite exciting and interesting with the beginning battles and the unique teaching tests that follow.  Ichigo is left in a precarious position and the Quincy has a secret we haven't been made aware of yet.  Another good volume. (4/5)

Vol. 8: The Blade and Me - Lots on intense battling and testing as the training continues while a group gets ready to gather together and enter the Soul Society to rescue Rukia.  The focus is on Ichigo's training sessions with Hat & Clogs to become a Soul Reaper in his own right but also being followed briefly is the training of Chad and Orihime as they learn to summon then control their new-found powers.  Uryu is not seen much but has a couple of brief cameos showing that he has obtained a new power via a mysterious master.  I felt like there was a lot of character development in this volume as each character involved had to mature from how we first met them long ago in volume one.  The book is left on a high note with the gathered team entering the Soul Society and possibility of danger.  The story is pretty easy to follow in Bleach, not so complicated as can be found in other manga series, and while containing plenty of action and creatures in the form of Hollows and spirits, the author finds plenty of time to lighten up the tone with numerous lighthearted, funny scenes.  (5/5)

Vol. 9: Fourteen Days for Conspiracy - Intense action-centred volume with humorous bantering to add some light moments.  Our team now consisting of Ichigo, Orihime, Chad, Uryu and Mr. Yoruichi have entered the Soul Society on their mission to rescue Rokia.  They meet lots of opposition there, fighting some awesome battles.  We learn the political set-up of the Soul Society and it's not as wonderful a place as one would have imagined.  There appear to be rebel factions here and though Ichigo is a Soul Eater himself he is not welcomed by the other Soul Eaters nor easily accepted by the souls of the dead.  Now that Ichigo is a Soul Reaper in his own right his character has changed and he is more rough and tough, confident but also fool-hardy and rushing in too quick.  Orhime and Chad have also matured and I love them both as characters.  A couple of new characters are added to the plot with the most promising in my eyes to be the powerful, yet somewhat outcast warrior woman Yoruichi; whose appearance takes on a piratical look complete with one missing arm.  The story arc is staying mostly on a single topic which is increasingly becoming more intricate.  A very satisfying series; loving both the amount of battles equalled with fine plotting.  There is a title spread on chapter 71 that I would love to have as a poster.  It collects the main characters subtly showing their powers and they all look posed for battle-mode.  Brilliant art!(5/5) 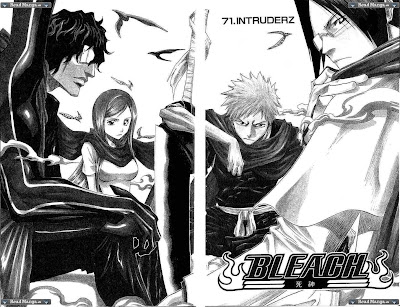