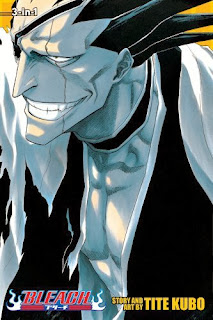 "Ichigo may have thought getting into the Soul Society was hard, but it did nothing to prepare him and his friends for the reality of the Seireitei! Now the rescuers are all split up, forced to take on battle-hardened Soul Reapers without backup. Can Ichigo train hard enough and fast enough to take down Rukia’s jailer before it’s too late?! "

My review contains no spoilers for this volume, however I can no longer refrain from including occasional spoilers for previous volumes.

Vol. 13: The Undead - This whole volume continues on with the epic battle between Ichigo and Kenpachi.  The plot moves further ahead and a few startling revelations are made.  Easily summed up but incredibly intense and leaves one panting for the next volume.  (5/5)

Vol. 14: White Tower Rocks - Oh wow! Major action in this volume though not much forward movement in plot.  Still the same battles between our heroes and the captains.  Orihime and Uryu are back.  I love Uryu!!  I think he's my favourite character at the moment.  Major reveal about one of the regulars and some fantastic battle action with a breathtaking ending.  I'm soooo glad I'm reading these 3-in-1's!! (5/5)

Vol. 15: Beginning of the Death of Tomorrow - Intense tension continues as do the battles with the captains of the soul reapers.  A good portion of the beginning involves Uryu in his epic battle, with a really nasty dude.  So far I'm pretty sure they will all eventually end up being on the same side, But not this guy; he is evil!!  A few more brief appearances by new characters.  Ichigo has been taken away to receive special training within three days which usually takes about 10 years so that he can defeat the strongest captain they have.   Book ends on a tense moment then we have a bonus chapter which goes back to the early days of the current sub-commander's days at Soul Reaper Academy.  The whole soul reaper intrigue and politics is interesting though I am wanting to get back to the soul reaper's main purpose, that of fighting Hollows(I mentioned this a few volumes ago too); so I was pleased to see a huge Hollow battle in the bonus story.  (4/5)
Labels: 2013 4.5* manga paranormal viz media