330. Catwoman: Death of the Family by Ann Nocenti & Rafa Sandoval 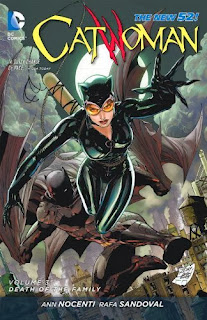 Catwoman: Death of the Family by Ann Nocenti. Art by Rafa Sandoval

"Catwoman must stay one step of The Joker ahead as he terrorizes Batman and his allies during “Death of the Family.” Then, Catwoman is hired to steal the Black Diamond—the source of Eclipso’s power! Collecting CATWOMAN #0, 13-18 and a story from YOUNG ROMANCE #1."

Received an egalley from Edelweiss.

I read the Batman series but decided to branch out and read all the "Death in the Family" volumes to actually see how DC combines these story arcs throughout the universe.  I'm no big fan of Catwoman and this volume did not change my mind but it was a decent story and I loved the art.  The book is broken up basically into two main stories featuring a lot of flashbacks into Selina's past and background.  I enjoyed the flashbacks the most  as it gave a better insight for me into this ambiguous character.  There is even a romantic flashback to her and Batman at the end!  The first half of the book contains the "Death of a Family' tie-in as Catwoman is harassed by The Joker in a pretty creepy/stalker mode.  I love the artist's rendition of Joker since he had his face cut off, he's not so comical looking and yet he is more appealing to me this way as I've never been a fan of the Joker either.  The second story has Catwoman being hired to go into A.R.G.U.S. and steal a black diamond from the top secret black room.  This starts out as a good caper but ends up involving the paranormal which I hadn't expected but it does introduce us to a new supervillain.  Finally Gwen and Selina, put on their own heist to steal some paintings which brings back elements of the first two stories and a brief cameo from Batman. Decent enough story but not anything to make me want to start reading Catwoman.
Labels: 2013 3* Batman DC Comics graphic novel superheroes