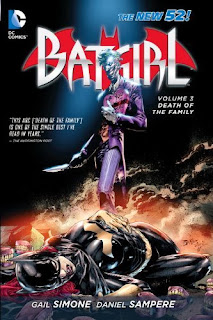 Batgirl (The New 52) Vol. 3: Death of the Family by Gail Simone. Art by Daniel Sampere

"Batgirl stars in these epics from #14-19 of her monthly series, plus BATMAN #17, BATGIRL ANNUAL #1 and a story from YOUNG ROMANCE #1, all spinning out of “Death of the Family.” The Joker is back, and Barbara Gordon must confront her past as she deals with the crazed criminal responsible for crippling her. Plus, once the dust settles, Barbara must deal with her family demons as her psychotic brother James Jr. comes after her."

Absolutely freaking awesome!!!  I got a tiny glimpse of Batgirl in Night of the Owls and I was interested, but after this book, I want more and have placed an order to read this series!!  Wow! What an excellent, exciting, very creepy story.  This story has the dark, eerie atmosphere that I love from the serial killer mysteries I love to read.  Batgirl is awesome!  The book starts off with Batgirl investigating some arsons being committed by homeless people but that is cut off and left hanging when she finds out from a source that the Court of Owls are still active.  Then Catwoman and Batgirl team up together against the Owls to save a halfway decent female Talon.  As I've said before I'm not into Catwoman, but I actually enjoyed this team-up with Batgirl.  This was an action-packed thrilling story, very intense, and I loved knowing the Owls are still out there working behind the scenes.  Then comes the best part of the whole book as both Barbara Gordon and her Batgirl persona deal with The Joker, Barbara's psychopath brother and the kidnapping of their mother.  This was freaking creepy to the extreme.  Heart-pounding reading and intense to the max.  Very, very disturbing storyline.  I never liked the old Joker, but this new one is a deranged psycho and demented beyond belief.  He gives me the shivers.  We also get a lot of backstory on Barbara's shooting that paralyzed her and her recovery throughout the book.  Then comes a story which I believe must be a cross-over from Batman where the Joker has all the family kidnapped and tortures them.  Again Intense.  Finally, the ending is emotional.  the death in the family secret is revealed and closure comes to part of the storyarc but it leaves us and Batgirl drained feeling that the next volume will possibly take a new direction for her family.  The art throughout is gruesomely creepy.  I'm majorly impressed with this book.  Just loved the intensity of it and the outstanding quality of the story.