349. Science: A Discovery in Comics by Margreet de Heer 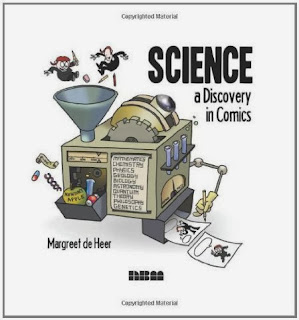 Science: A Discovery in Comics by Margreet de Heer

A Discovery in Comics

"Science: dull or hard to understand? Not if you read this book! The creators of 'Philosophy - a Discovery in Comics' take on a new challenge, and explain the different scientific disciplines in clear, colorful chapters.
Who exclaimed "Eureka" and why?
Why did Galileo get into a fight with the Church?
What happens when you have your DNA tested?
All these questions and more are answered in a chronological journey from ancient times to modern Quantum Theory, with creators Margreet and Yiri as your witty guides.
A great comic book for anyone who wants to learn in a fun way the bigger framework of science, or brush up on what they learned in school."

Received a pdf for review from the publisher.

Science is not exactly one of my interests however I am interested in history and non-fiction graphic books/comics, so I read this book out of curiosity.  I found it incredibly well-done and both informative and humorous with a comic-style of art.  This would make an excellent highschool book.  I wouldn't recommend it for younger as the narrators are adults and there is some adult language present.  A grand-sweeping cover of both the history and purpose of science it briefly touches on about every aspect of science you could image; which is pretty impressive.  I wholly enjoyed the first half of the book as it was what you would call historical in nature, but as the book got into the 19th and 20th centuries the topics became too involved and scientific for my tastes that I did become bored with the material, but I'll be the first to say that is my fault and not the books.  There is very good discussion between religion vs. science showing how they conflicted in history but ultimately giving the proper understanding they can and do go together very well.  The only bias I saw was that they were heavy-handed where the Catholic church was concerned but since the authors are Dutch I wasn't surprised considering the Protestant history of the Netherlands.  There are two other books in this series which follow my interests much more that I would read given the chance.  The one on Philosophy is available but the one on Religion has not been translated into English at this time.
Labels: 2013 3* graphic novel NBM nonfiction science