350. Delilah Dirk and the Turkish Lieutenant by Tony Cliff 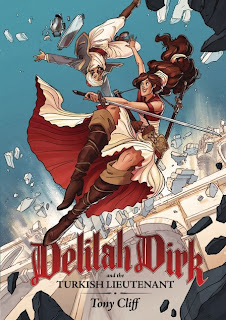 Delilah Dirk and the Turkish Lieutenant by Tony Cliff

"Lovable ne'er-do-well Delilah Dirk is an Indiana Jones for the 19th century. She has traveled to Japan, Indonesia, France, and even the New World. Using the skills she's picked up on the way, Delilah's adventures continue as she plots to rob a rich and corrupt Sultan in Constantinople. With the aid of her flying boat and her newfound friend, Selim, she evades the Sultan's guards, leaves angry pirates in the dust, and fights her way through the countryside. For Delilah, one adventure leads to the next in this thrilling and funny installment in her exciting life.

A little bit Tintin, a little bit Indiana Jones, Tony Cliff's Delilah Dirk and the Turkish Lieutenant is a great pick for any reader looking for a smart and foolhardy heroine...and globetrotting adventures."

This is a wonderful high adventure journey in the style of Indiana Jones but with many differences.  Set in historical Turkey, the main character is a "globetrotting troublemaker" of a female who while not magic does have a certain quality of magical realism about her abilities and escapades.  Her, at first unwilling, partner is a more serious minded down-to-earth man in the Turkish army who sets out with Delilah and really only wants to come out of the journey alive and in one piece.  They make a great pairing and the dynamics between the two are fun.  The exotic and historical locale also make for a fine adventure which is full of derring-do from the get go.  Though full of excitement the story does also take the time to develop a relationship between these two opposites who start off adversarial and grow a friendship, a partnership, between them.  Those who like adventurous stories will like this.  The art is good but not particularly my type; I found it a bit cartoon-y and somewhat dark in colour at times making it hard to see all that is going on.  But overall an eye-catching style that will appeal to many.  While this Canadian has worked in the industry for a while and been a regular contributor to the Flight anthologies this is his first solo graphic novel.