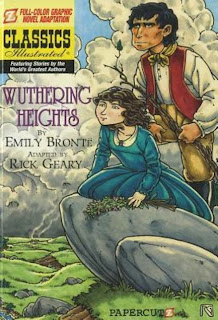 Borrowed a copy through Interlibrary Loan.

This is the last book Geary contributed to this series.  I read Wuthering Heights once when I was an impressionable young teenager and remember loving it; I'm not sure if I would feel the same today should I reread it now that this has brought back to the story to me.  I love the Gothic brooding story set upon the Yorkshire Moors (from whence I originate), but the overdramatic, possessive love story irritates me somewhat like a Jane Austin romance.  However Geary has done a wonderful job of adapting such a complicated plot and paring it down to this brief book in hand.  He has managed to capture the true essence of all the main characters of the meat of the story, Heathcliff, Cathy, Earnshaw, the Linleys and Nelley.  The final part of the story featuring the children and heirs of these characters is somewhat less fully captured and progresses rapidly to the end but overall the book serves two purposes: for one who has read the story it brings back a tale you may have forgotten and in my case I certainly know I do want to re-read this and the other two famous Bronte sister books in the near future.  Secondly, for one who hasn't read the original, it genuinely gives a summary of the story and could provoke reading of the classic.  Geary's usual art style is very present here but I found the addition of colour not quite as pleasing to the eye as in his two previous books in this series.  Geary will always be much loved in b/w by me.  His unique character faces and facial expressions are great additions to the characters of the main participants.  I only had a problem with Heathcliff who was presented as not being English by making him a strange sooty colour which made him appear dirty as if he was a chimney sweep.  His ethnicity is never fully identified in the original novel.  He is mainly described as a dark-skinned gypsy.  Others remark he may be a "Lascar" mostly meaning of East Indian descent or an "American castaway" which perhaps could allude to being of African descent.  However Geary's portrayal shows none of these ethnic traits but rather just someone sooty and at times rather greenish-looking.  Overall I enjoyed the refresher on the story and am impressed with the Classics Illustrated series.  I ventured into these as part of my Rick Geary reading but will continue on now to read the series for its own merit.