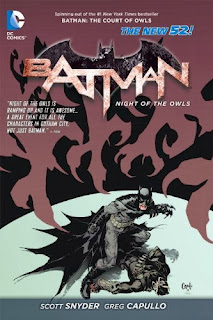 "In this new hardcover, evil spreads across Gotham City as Batman's allies, including Red Robin, Batwing, Robin, Batgirl, the Birds of Prey, Nightwing and even Catwoman find themselves in a battle coming from all sides.

The Court of Owls makes its move against justice in this sprawling tale of corruption and violence.

Fantastic!  I absolutely love the new Batman!  This volume does not actually have a number sequence.  I've personally called it Vol. 2.5 in my collection, thinking that is where it best belongs for reading order, though it *could* be read as 1.5 between vol. 1 & 2.  What happens here is most of Vol. 2 The City of Owls is collected in this large volume (not *all* mind you, but a large portion).  Therefore, I think it is to be most appreciated read by fans after volume 2, jmho.  While The City of Owls concentrates on the Court story and the identity of the mysterious turn-coat assassin and the secret deep in Bruce's family.  This volume, only touches upon that secret identity and instead focuses upon everything that happened that one specific night when Alfred put out the call to the Bat family for their help in protecting the targeted "shapers & movers" of Gotham.  So in between the issues (chapters) from Batman: City of Owls there are collected issues from the comics All-Star Western, Batman: The Dark Knight, Batman: Detective Comics, Batgirl, Batwing, Birds of Prey, Nightwing, Batman and Robin, Catwoman and Red Hood and the Outlaws.  We see what each of these heroes/villains did that night to help stop the Court of Owls in Batman's hours of darkest need.  I just loooved the huge collection of various characters.  Some I'd never read or heard of before, others had me intrigued and it was great seeing some of my old-time favourites again.  One thing I liked that had confused me in Vol. 2 was that a second story about Mr. Freeze which occurs prior to it but in an issue of "Red Hood" makes more sense of that story arc and why he just appeared the way he did in "Batman".  Loved that part.  Also like how the Harper Row episode was omitted in this volume as it has nothing to do with the Court of Owls arc.

How I'm left feeling after reading this?  The book ends the same as Vol. 2 (minus Harper) leaving the Owls story in the same place and I'm anxious to continue on with the story.  I have the next volume on pre-order.  As to the other comics that were gathered here: All-Star Westerns was a short, brief piece which gave me no insight into the characters I wasn't familiar with though I enjoyed it; I loved all the various Batman issues but none so far have tempted me to start reading them (I'm going to stick with plain old "Batman" for the time being), though I had always been a fan of Detective Comics in the past and loved the Arkham Asylum story here; I'd like to meet up with Batgirl again she interested me and I could possibly be interested in reading her, Batwing I'd never heard of and he didn't impress me in this little glimpse of him; Nightwing again totally thrilled me and I am putting in an order to read him; I've never liked Catwoman (except Eartha Kitt on the old TV Show LOL) and haven't changed my mind; but Red Hood, who is new to me, has me very intrigued and would like to meet up with him again also to see if I'd like to read his series.  The artwork is all over the place with so many artists at work here, but it all flushes together well and Capullo has a major presence that unifies it, however it is a beauty of a book to browse through.  One thing I'm also enjoying with this series is all the new background information we are getting on the characters.  I'm not a diehard and don't know/remember all this stuff but I can tell that some of it is retelling what has been accepted from previous histories but that we are getting deeper, darker new versions added into it as well,  I love the flashback episodes!
Labels: 2013 5* Batman DC Comics graphic novel superheroes