331. Before Watchmen: Comedian/Rorschach by Brian Azzarello 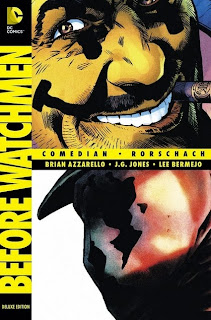 "Writer Brian Azzarello brings his gritty, nuanced storytelling to these two unforgettable characters. COMEDIAN, featuring art by J.G. Jones (FINAL CRISIS, Wanted), plants the famed war hero within the context of modern American history, as we discover the role he played in the Vietnam War and the Kennedy assassination.

In RORSCHACH, Azzarello teams with artist Lee Bermejo (JOKER, LUTHOR) to show how one of most dangerous vigilantes the comics world has ever seen became even darker.

Comedian:  Wow!  Intense, loved it!  Really fabulous backstory on what shaped this man.  Starting with the Kennedy years of playing football with Jack, Bobbie and Ted; Eddie (the Comedian) had friends in high places who used his superhero status to further their political ambitions.  Moving from the world of Jack and Jackie, Comedian goes to Vietnam as a figurehead but can't not play the part of leader.  Men respect him and follow him, he has a plan and wants to end the war, contrary to the government's wishes.  He's a patriot with a bad ass attitude and we learn the early story of what shaped this man, what 'friends' he had to kill along the way for what he believed was the best for his country.  Dark, stark and violent.  Loved it.

Rorschach:  Rorschach's background story is covered in the Nite Owl book, so with this one we jump right into superhero mode with R. as he works his cases.  He is being set up and left for dead by a big ugly dude named Rawhead then goes out to work his revenge upon him while at the same time working on the Bard serial killings.  While simply a superb story we get a clear picture of who R. is, with and without the mask,  and how he works.  The art is simply stunning, very modern and life-like.

This was my favourite of all four Before Watchmen books.  I loved the Nite Owl story but I loved both stories presented in this volume and it wins hands down as my favourite.  I enjoyed them all though to one degree or another.
Labels: 2013 5* DC Comics graphic novel superheroes