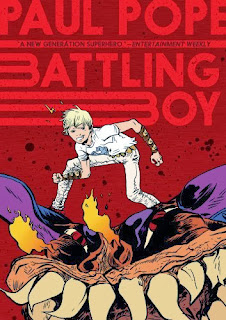 "Monsters roam through Arcopolis, swallowing children into the horrors of their shadowy underworld. Only one man is a match for them - the genius vigilante Haggard West.

Arcopolis is desperate, but when its salvation comes in the form of a twelve-year-old demigod, nobody is more surprised than Battling Boy himself.

IT'S TIME TO MEET AN ELECTRIFYING NEW HERO."

I don't have much to say about this one.  Having noticed the other high star ratings this book has received I realize I am in the minority in my opinion but I just didn't like it.  I really wanted to though!.  It sounded so like my type of book but it just didn't do anything for me.  Even though it was full of monster-battling action from beginning to end I found myself bored and wanting the book to hurry up and be over.  The Hero's son being sent to battle monsters to prove his coming-of-age and hero-worthiness felt cliched and I found the font got awfully small at times.  Sorry, but I got nothing from this one.  The book ends abruptly too, obviously making this part one of a possibly long series which should have been labeled Vol. 1 to let us know.
Labels: 2.5* 2013 fantasy first second books graphic novel MG