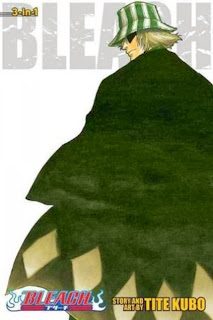 "A new reality-show craze is sweeping the nation, garnering legions of screaming fans (the majority of them being teenaged girls). But this program comes with a supernatural twist--the host, a media-savvy spiritualist, travels to local hotspots and performs exorcisms, live on national TV! Surly Soul Reaper Ichigo Kurosaki has his doubts about this primetime prima donna, and his assumptions are about to be put to the test--the show is heading straight for his neighborhood! What effect will this unprovoked media presence have on the fragile balance between Earth and the spirit world?"

Vol. 4: Quincy Archer Hates You - A lot of little stories going on here with plenty of humour and action. A cute little one shot story about Kon starts off with a laugh then we get into plot with the introduction of a new character, Don Kanonji, who fights spirits on a reality show.  Ichigo meets up with him and it seems as if he'll be a recurring character from now on.  He's very irritating.  Then we move on to another character who has been slinking around for a while and finally found out what she? (maybe he) is up to.  This is where the title for this volume comes from and I like the implications of where this will lead.  The spirit world has been explained much more in detail now and we've learned various ways ghosts become Hollows and other various forms of ghosts as well now.  A great manga!  (4/5)

Vol. 5: Right Arm of the Giant - Whoa!  Getting intense.  So Quincy Archer's real name is Uryu Ishida and he's definitely a he, there's no mistaking it now.  The first half of the book concerns a battle between him and Ichigo which I loved and even though Ishida is a bad guy, I like him.  Then it turns out that there are more people than we knew who can see ghosts, Hollows or Soul Reapers and they find out they have special powers too.  Chad is featured in the second half and I really enjoyed him being in the spotlight with a little look into his past as he's been a favourite character of mine from the beginning.  The title of this volume refers to him.  We leave this volume with the battle still in progress and several of our main characters injured to an unknown degree.  I haven't mentioned this yet but I'm loving the art.  With such a huge cast the artist is able to make everyone very distinct and I'm not having any problems sorting out who is who, though I only have a few names down as of yet.  I'll also mention at this point that this manga is very age appropriate.  There is one very busty girl but no other sexual allusions at all.  Much tamer than say... Dragonball.  (5/5)

Vol. 6: The Death Trilogy Overture - Almost the entire book concentrates on the battle started in the last volume and the consequences of it resulting in Ichigo and the Quincy battling together a humongous Hollow.  So this is a great volume for battles.  Usually the battles are not my favourite parts of shounen but I'm really enjoying these scenes in Bleach!  Once things settle down the volume ends on a curious note with the introduction of two new Soul Reapers and their intentions are not good concerning either Rukia or Ichigo.  They make an impressive entrance though and look pretty cool!  (4/5)
Labels: 2011 4* manga paranormal viz media