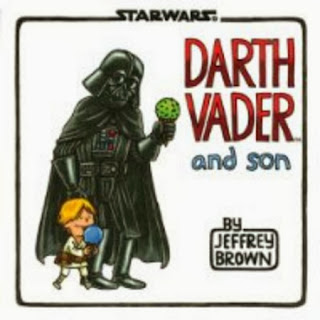 "What if Darth Vader took an active role in raising his son? What if “Luke, I am your father” was just a stern admonishment from an annoyed dad? In this hilarious and sweet comic reimagining, Darth Vader is a dad like any other—except with all the baggage of being the Dark Lord of the Sith. Celebrated artist Jeffrey Brown’s delightful illustrations give classic Star Wars® moments a fresh twist, presenting the trials and joys of parenting through the lens of a galaxy far, far away. Life lessons include lightsaber batting practice, using the Force to raid the cookie jar, Take Your Child to Work Day on the Death Star (“Er, he looks just like you, Lord Vader!”), and the special bond shared between any father and son."

I enjoyed Brown's latest book "Jedi Academy" so much I wanted to check out these other two books I had heard so much about.  This was not what I had expected and I only thought it was OK.  A small book filled with one page comic strips featuring what it would have been like for Vader to be a father to Luke when he was a little boy.  An extensive knowledge of Star Wars is needed to get these jokes, especially the original trilogy, with some familiarity of the characters in the new movies also.  I didn't really find any of the comics hilarious, some were cute, some I didn't get and others I just didn't think were funny.  The art on the other hand is very cute and funny.  Vader looks so awkward in his role as "Dad".  I don't see this as being a book for kids.  To me it seems more aimed at adults, parent specific humour, and because of the father theme would make a good Father's Day present for the Star Wars fan dad. 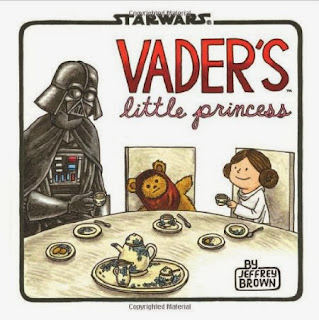 "In this irresistibly funny follow-up to the breakout bestseller Darth Vader™ and Son, Vader—Sith Lord and leader of the Galactic Empire—now faces the trials, joys, and mood swings of raising his daughter Leia as she grows from a sweet little girl into a rebellious teenager. Smart and funny illustrations by artist Jeffrey Brown give classic Star Wars® moments a twist by bringing these iconic family relations together under one roof. From tea parties to teaching Leia how to fly a TIE fighter, regulating the time she spends talking with friends via R2-D2’s hologram, and making sure Leia doesn’t leave the house wearing only a skirted metal bikini, Vader’s parenting skills are put hilariously to the test."

I actually enjoyed this a little more than the first one, maybe because I'm a girl and could relate more to having had some of these experiences myself at one time.  Anyway, as opposed to the "Son" book, I actually thought a couple of these were funny and certainly "got" more of the humour.  Still, I have to say I don't think it is anything special though I do love the art, especially Vader's awkwardness at being a "Dad".  Again as the first book, I think the best audience for this book is Dads, and it would make a good Father's Day present for the Star Wars fan Dad of a daughter.
Labels: 2012 2013 3.5* 3* Atheneum Books based on a movie Chronicle Books comic strips humour science fiction star wars