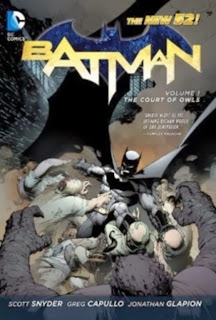 "In this new trade paperback, a series of brutal murders rocks not only Gotham City to its core but also the Caped Crusader himself when the prime suspect is one of Batman’s closest allies: Dick Grayson!


I have been salivating to get started on this series and now that the new 'Death in the Family' saga is about to be coming out in trade (It's out at time of this review publication and I'm reading it!) I thought I'd better put other things aside and dive in.  Wow!  This was worth waiting for; it was even better than I had hoped for.  I'm a big Batman fan; I've read DC comics off and on all my life but never read them in order or became fangirl-ish about them so while I know all the heroes and villains I'm not up on the backstory of everybody.  The new 52 is awesome in my book as it lets me get a new fresh look as if I'm a newcomer.  Snyder's Batman is the dark, broody one I love so much!  The first little scene at the Asylum was fun with all the villains and I loved! how the Riddler had a shaved head with a green question mark of hair shaped onto his head.  We meet all three Robins which was great for me as I'm really only familiar with Dick Grayson in that role and never read Nightwing.  He is the only one who features in the rest of the book, in his Nightwing role, and I liked the character enough that I want to read that series of the 52.  Batman finds a new villainous group, The Court of Owls, has been operating underground in Gotham since the 1800s and has a connection with his family.  They have sent an assassin, The Talon, out to get Batman.  A dark, involved story with equal amounts of action and plot.  Capullo's art is marvellous; the colours suit the mood and the "owl" members are certainly eerie.  I found myself page-turning through the novel, but not too fast as I had to savour the art, and the ending left me with a rush.  Great new start to the Batman!
Labels: 2013 5* Batman DC Comics graphic novel superheroes