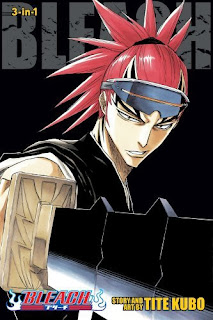 "Ichigo and crew are determined to rescue Rukia from the Soul Society, and with the help of explosives expert Kûkaku, they actually have a chance of making it inside the walls. But the plan hinges on Ichigo getting control of his torrential spiritual energy, and with Rukia awaiting execution, there’s no time to waste! And even if they can breach the Soul Society’s defences, there are twelve companies of angry Soul Reapers standing between them and their friend!"

While this review contains no spoilers for this volume it is impossible at this point not to reveal spoilers about previous events.

Vol. 10: Tattoo on the Sky - Oh! Wow! What an absolutely amazing volume.  Pure action and plot the entire way through; getting deeper and deeper into the Soul Society workings as the "team" goes forward to rescue Rukia.  Two new additions to the team are fabulous characters, one male and one female.  They also have a mysterious back story that is just starting to be explored that is hidden within the Soul Society as well.  There is only one battle in this volume and it is saved for the end but holy moly is it ever worth the climax.  Ichigo meets an awesome opponent within the walls of the Soul Society and he is also an awesome dude who I'm hoping may turn out to work with Ichigo in the end.  But for now this is a bloody battle like we haven't seen to date yet.  So now that I've gushed, let me mention two minor things in this series that annoy me.  Whenever something dangerous is about to happen or a fight is about to begin the background of the frame is covered in huge capital letters with the word "DOOM" and the artist, Kubo, has an irritating habit of drawing glasses on people so that one lens shows an eye and the other is empty.  It is a strange look.  So there, proof I'm not all gushes and am able to be critical about Bleach ;-) but this is probably the best volume to date! (5/5)

Vol. 11: A Star and a Stray Dog - This new story arc is fantastic.  This volume continues with more of the same.  The team is still trying to rescue Rukia.  They have infiltrated the Soul Society and sensors have found that they have been breached so the team is being chased down and confronted in battle.  Ichigo is front and centre for this volume with both Ganju and Uryu having prominent story lines as well.  Everybody else at least makes a cameo so for all purposes a satisfying volume.  Lots of fighting and battling with new characters, mostly Soul Reapers, being introduced.  While they are all Ichigo's enemy at this point in time, I can't help but think that many of them will become "good guys" and long lasting characters.  I hope so anyway as I really like most every Soul Reaper we've met so far.  Plot isn't really forwarded much here but we do get some backstory on Rukia and finally discover Uryu's new special power he secretly learned in training several volumes back.  (4/5)

Vol. 12: Flower on the Precipice - The search for Rukia continues.  This volume concentrates on Ichigo and Ganju together and Chad as they all follow the trail to Rukia's prison and are confronted by higher and higher powered Soul Reapers trying to kill them as the intruders they are.  This pretty much covers the whole volume.  The last dudes both Ichigo and Chad are left battling are really ruthless opponents and we're left wondering how on earth they'll manage to defeat them.  I am left wondering to myself though, why can't everybody just take a minute to talk to each other because I think that once the Soul Reapers hear Ichigo's story they will realize he is one of them and they should all eventually be on the same side.  Though I'm loving the new arc, I am missing the actual soul reaping and battles with the Hollows.  (4/5)