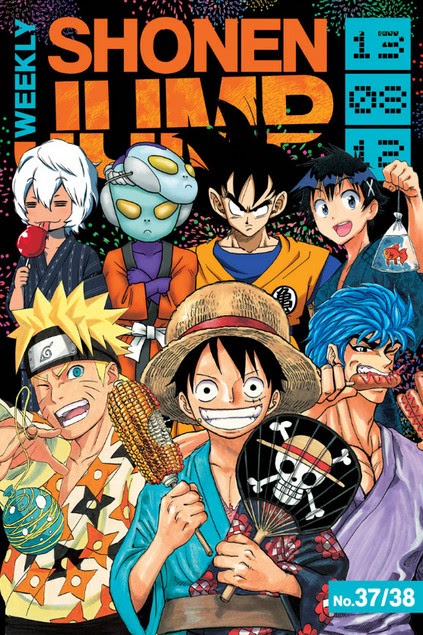 Still having a hard time hanging my hat on the ones that have been running for years but enjoying them nevertheless. Really liking One-Punch Man!

1. One Piece Ch. 717 - They find out that the toy people were really once humans changed by Doflamingo years ago and now the final battle will take place at the secret factory under the coliseum. I find this hard to follow in this format and really prefer the books. (3/5)

2. Naruto No. 642 - It seems that some of the types of jutsu aren't working in this battle and they no longer have regenerative powers but Naruto has been able to master some other jutsu and deliver a massive blow to a dude that insults his father. (3/5)

3. One-Punch Man Punch 23, Part 2 - One-Punch isn't in this one, but we have another guy battling awesome sea creatures then it ends with this mega-huge muscle dude who looks like King Neptune in a Speedo! Awesome! (5/5)

4. Nisekoi No. 642 - Onodera is sick so Raku goes over to look after her but ends up spending most of is time with her little sister Haru who hates him. There relationship changes. This actually is starting to grow on me for a dumb little shoujo. LOL (4/5)

5. Jaco the Galactic Patrolman Ch. 5 - Jaco saves a girl, beats up some thugs and then the police making them need to escape. Fun. (4/5)

7. World Trigger Ch. 26 - The team gets a lesson in how to use a trigger, then they talk plan of attack and the chapter ends mid-battle. I usually like this one, but kinda slow this time. (3/5)

8. Dragon Ball Saiyan Saga DBZ 27: Nappa continues fighting Kuririn, Piccolo and the little guy, forget his name. They are not doing too well, but near the end they can feel a huge power coming close ... and we all know who that is! I like how in this colour version whenever something or somebody splats it is always in red so it looks like blood. (5/5) 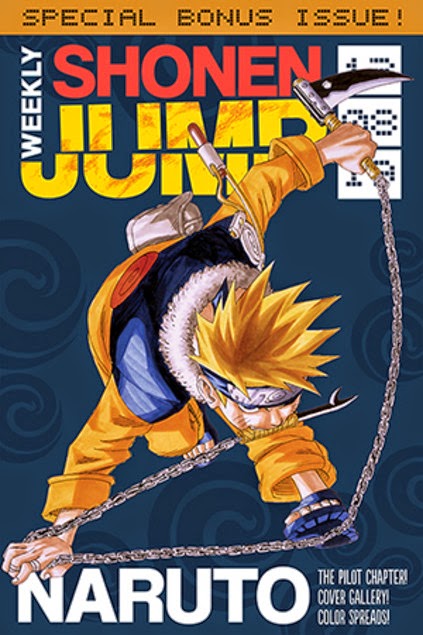 No issue came out this week due to a Japanese holiday so the American publisher put together this Naruto themed bonus issue for subscribers.

First is a high-resolution cover gallery of 62 Naruto manga covers, then five full-colour spreads from their pages showing the evolution of Naruto.

Naruto's First Appearance (Aug. 1997 from Akamaru Jump) I really enjoyed this. A one-shot story, introducing Naruto. He is a troublemaker and has no friends so he is sent to the humans and told to make a friend and bring him back as proof. He actually ends up getting involved in a crime, murder and mystery. Very different from the Naruto of today but shows some elements were there from the beginning.