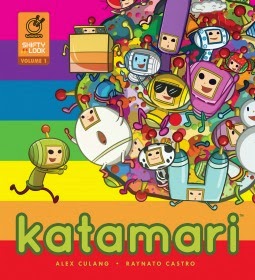 Katamari Volume 1 by Alex Culang
My rating: 5 of 5 stars

This cute cover attracted me and I'm so glad I read Katamari. There are some introductory pages explaining that this originally appeared as a webcomic back in the day based on a video game series mostly for the Playstation systems. I'd never heard of the game before let alone played it however this book version of the comic strip has running commentary by both the author and illustrator which clues the reader into so much information about the games, the comic and the making of, which makes the fun comic even more delightful to read. There are several large story arcs included in the volume and interspersed in between either one-shots or just 2-3 page arcs. All the arcs are independent stories but they do build upon each other so while the book has no overreaching plot it does have a cohesiveness that pulls it together well. I love the characters; they are adorable and the art is cartoony excellence. The stories range from saving the world from doom to pointless comedy one-shots providing a wide range of topics that keeps the stories fresh and never dull. I'm quite impressed as the book ended up being much more than my initial impressions, keeping a running theme of the value of friendship throughout. Appropriate for all ages.