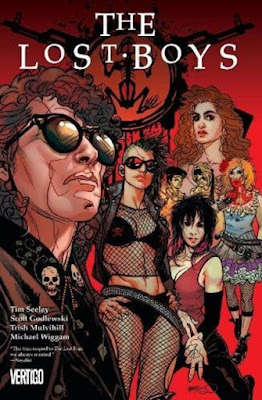 I love The Lost Boys movie. I watched it in the theatre when it first came out and rewatched on video sometime in my 20's. That was a long time ago though, so I don't really remember the plot or characters but rather the actors who were in it. This new volume purports to take place following the movie. There are a few of the old characters present and some new ones. First, the plot takes care of some threads thought finished at the end of the movie but evidently weren't. Then the plot grows, having the younger boys take over being the vampyre hunters and a plot to reawaken the mothers of all vampires so as to take over the world. The characters played by the two Coreys and Keifer are very well drawn, showing enough likeness to recognise them but with a bit of artistic licence also taken. A fun, page turning read for this fan.