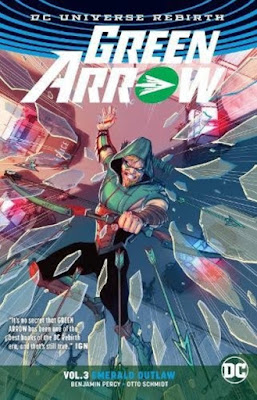 I liked this and am enjoying where the story is going with Green Arrow. I do have to admit, though, that I much preferred the New 52 Green Arrow to this one. This volume especially turns the story into more of a political thriller/mystery than a superhero one. Queen Industries has been taken over and there are nefarious things going on while the plot is beset with corrupt politicians and bad cops. If you've ever read DC then you know they wear their liberal pov on their sleeve, but this volume was steeped in so much liberal agenda that I found myself rolling my eyes many times. I don't like to mix politics into my reviews but when the book itself is doing so I can't not mention it. Throughout the whole book, the reader is being "taught" that conservatism equals careless and bad, while liberalism equals revolutionary and good. There is only so much of that I can wade through in a comic and they crossed the line here as to be disrespectful of a good portion of their readers. What I do like about this story and especially in this volume is the relationship between Oliver and Black Canary. Just the right amount of time is spent on their being a couple without interfering with their superhero duties. Mixed feeling about this volume but I'll keep reading as Green Arrow has been one of my faves.