H.P. Lovecraft's the Hound and Other Stories by Gō Tanabe 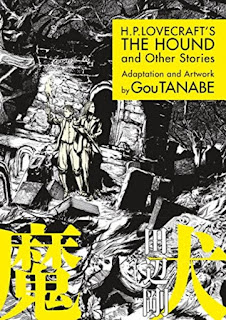 H.P. Lovecraft's the Hound and Other Stories by Gō Tanabe
My rating: 4 of 5 stars

I haven't read much at all of Lovecraft but his work is something I would like to delve into someday. Three tales are presented here in traditional manga format. The art is exquisite and frightening, very detailed. The stories are oh so very dark and oppressive. Quite a unique presentation for an introduction to Lovecraft and which I think fans will also appreciate.

1. The Temple (1920) - The art is quite good but I can't stop thinking how great it would be for Junji Ito to do a Lovecraftian book. Anyway, as usual, this Lovecraft tale leaves me baffled. A German submarine deals with superstition, mutiny and the lost Atlantis. Eventually, he is alone at the bottom of the sea. The tale (and art) are very oppressive and the feeling that something dreadful is going to happen lingers throughout but by the end, I'm not sure if it did or not. I know what happened but don't get the point. (3/5)

2. The Hound (1922) - Now this is more like it! Two rich men bored with the frivolities of life turn towards the darkside. It's been a while since they went on a treck for treasures when one man finds out about a thief dead 500 years ago who was buried with an amulet which has something to do with corpses. Upon return to London, they are haunted by visions and beasts until they see their own undoing. The only problem is that the art did not flow. It was like scene to scene to scene without a narrative flow. (4/5)

3. The Nameless City (1921) - I feel like I've read this story before. It's the best one by far and the one most understandable. It is here with the third tale that I can see the connection between the stories, of the Mythos that Lovecraft is famous for and which I don't fully understand yet. The Necronomicon and its author, an 8th century Arab are mentioned in this and "The Hound" shedding some light on that aspect for me. The main similarity is between this and "The Temple, though. In that one, a man finds an abandoned lost city under the ocean and the story ends as he is about to enter the temple. In this one, a man finds an abandoned lost city in the Arabian desert and his horrific journey begins as he enters the temple. Quite an intense story with the foreboding becoming heavier and heavier as the story progresses. (5/5)