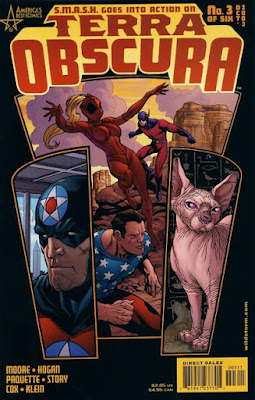 I really enjoyed this! Jumping in with issue #3 it is hard to give a summary of the story as I had to figure it out as I went along, However, it was easy to figure out that the main plot involves a menace of some sort called Terror who has created a null void where all electricity doesn't work and it is steadily getting bigger until it will cover the entire world. The team members of S.M.A.S.H. are trying to stop it. They are interesting heroes and I'm enjoying their team dynamics although no one really used their powers much in this issue. 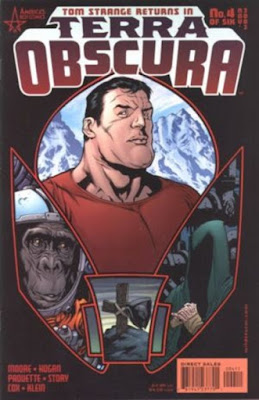 I really like this. The series has the return of pre-WWII superheroes that I'd never heard of before and Alan Moore tells a great story. The characters are split into two groups, both having epic moments. SMASH finds Dr. X and the others find Tom Strange, both people have been missing for years. I'd love to read all the issues of this series!

Jumping into issue 4 of 6 makes for a bit of a whirlwind where the plot is concerned. Taking place two years after Vol. 1 of "Terra Obscura", there are some changes in the characters' lives and someone who was good earlier in the series is now mysteriously (to me) bad. So while I wasn't totally into the plot, I did enjoy meeting up with the characters again and learning more about them. I didn't like the art though, everybody was ugly and off-putting in appearance. While Tom Strong is part of this storyline, it is the team S.M.A.S.H. that I like the best and I'd certainly like to read more.