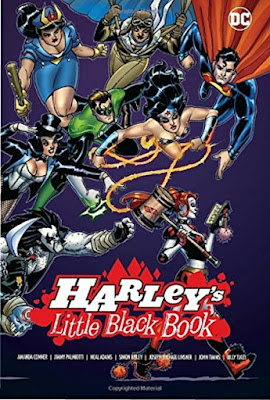 I liked this! But first a little commentary. I like Harley Quinn but ever since her "Gang of Harleys" and the first two Rebirth trades she's been portrayed as a silly lovable anti-hero *not* the suicide squad Harley and I didn't like those three books much. "Harley's Little Black Book" brings back the insane violent Harley while keeping the lovable part. Six one-off chapters have Harley teaming-up with a popular superhero or even several. The "black book" in the title is figuratively referring to the fact that she knows a lot of superheroes. The first four issues in this collection of six were excellent. Harley was not just silly but her real crazy insane self. There was lots of violence (ie flying body parts) and tons of sexual innuendo while being endearing at the same time. Harley teams-up (not always by agreement ) with several superheroes including Wonder Woman, Green Lantern, and Zatanna. Running through the first three is a very light story arc of her meeting and having come to hers, the London Society of Superheroes, a rag-tag of British stereotypes. The last three stories surround her stealing Superman's "balls" and using one that transports her places. The next story up transports her to WWII where she teams up with the Bombshells. The final two stories were ridiculous and were really hard for me to finish. First Superman and her stop a world invasion and the story is so out-there it felt like a send-up of a Mad Magazine send-up of superheroes. And finally, the last story with Lobo was bad, verrrry bad. But Harley was the violent Harley with attitude that I liked so the book is getting 4 stars from me.