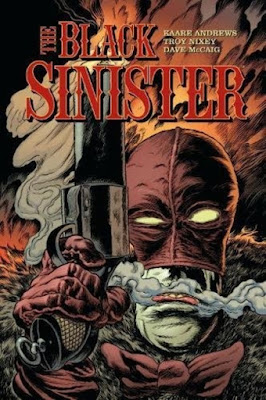 The Black Sinister by Kaare Kyle Andrews
My rating: 3 of 5 stars

What a ride! This was nothing like I was expecting. It's really hard to categorize this. The publisher calls Black Sinister an anti-hero but he's a far cry from what I think that denotes. Rather, I'd place it as a mix of horror and parody. The plot is too crazy to explain with corrupt officials, greedy capitalists and a stint in Hell. Emerson, Black Sinister's real name, is a Batman figure who believes in keeping the night safe and is a surly, broody character. Then there is Danby, his psychotic butler, who likes to sniper people for fun under Black's stipulation of no head shots or vital organs. Black's character leaves the comparison to Batman and merges more with Judge Dredd as he punishes gangsters, thieves and jaywalkers with the same harshness. The illustration is awesome and extreme in its violence. It's hard to say I really liked this but it did entirely hold me captive for its brief length.