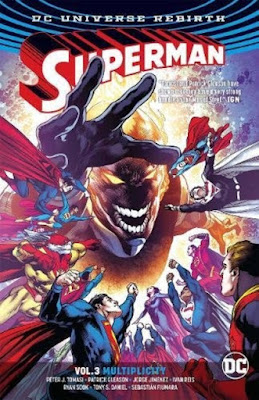 I've never really been able to get into the multiverse and the idea of parallel earths with different versions of each other living on them. And the multiverse is exactly what this is all about. A Justice League comes to visit Superman and its Superman leader tells him that someone is stealing all the Super-men and -women across all 52 earths. Our earth's Superman joins them in contacting all the other Supermen who haven't been captured yet so they can fight the one behind it all, Prophecy. At the end, though, we meet a shadowy person who is really the one in charge. Then the volume ends up with what appears to be a one-off about Superboy and his friend, only at the end, we see (what appears to be) another dark shadowy figure watching them. These two figures must be connected in some way and I'll look forward to how that pans out in the next volume.

Any idea who either of the "shadowy figures" may be?

I'm thinking the *real* Superman may be the one at the end, or am I just wishful thinking.
Labels: DC Comics graphic novel Patrick Gleason Peter J. Tomasi superheroes