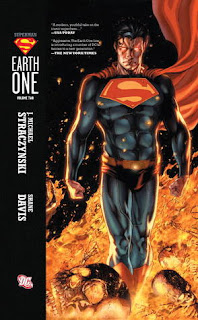 Very satisfying follow-up to Volume One, giving us a new take on the Superman story. This volume is all action as some old villains with new twists return to Metropolis. The main story concerns a serial killer who accidentally gets zapped by some sort of radiation and turns into Parasite. This gives Parasite a new origin story and identity. The fight between Supe and Parasite gives some good old fashioned superhero battles as the main story, but behind the scenes, the military is wary of Superman and trying to discover a way to kill him, if he ever turns against mankind. Entering on the scene are Lex Luther and his wife Alexandra. So far Lex seems to be a decent, moral kind of guy while his wife is the one with grandeurs of power. The art is fantastic too. Especially the nice modern take on Jimmy Olsen, getting rid of his nerdy image for a more attractive, hunky look. 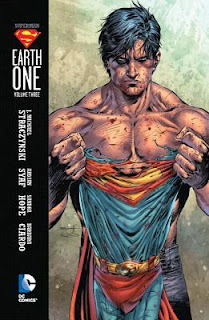 Excellent! The best of the Earth One Superman books. I'm really enjoying this origin story! The art is by a different person this time, but they've kept to the same style and look. There are new characters we haven't had in the Superman-verse before and I'm liking them, but also there is a return of familiar ones. This volume has Superman working to save the world when another survivor of Krypton arrives to destroy him. Since Earth isn't taking too kindly to Supe's interfering with world affairs they turn a blind eye to it, but everything works out in the end. I love that Lex Luthor is a good guy in this, but Superman makes an enemy of the Luthor family nevertheless. Great read!

Now I'm all caught up with the Earth One series and looking forward to Jeff Lemire's Teen Titans Vol. 2 coming out this August, which will be Vol. 7 of the entire series.