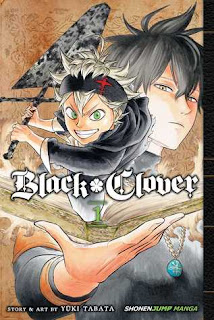 by Yūki Tabata
My rating: 4 of 5 stars

This is packed with just about every element you can imagine from shounen: magic users, guilds, battle spells, spell books, weird odd characters, sexy puns and an immature self-confidant main character. Asta wants to become the Wizard King but he has no magic so he's trained his body with physical strength. This first volume sees him join the lowest guild filled with misfits, receive the magic of "anti-magic" and go on his first mission. We can see a lot of influence from other manga, especially "Fairy Tail" and Zatch Bell", so nothing unique about this first volume. It's a lot of fun, though, tons of battles and humour, and we get introduced to a bunch of characters.