Your Lie in April 6 by Naoshi Arakawa 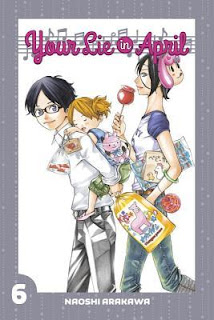 Your Lie in April 6

by Naoshi Arakawa
My rating: 4 of 5 stars


This volume concentrates on character. A violin gala is coming up and Kosei will be accompanying Kaori but the majority of the book is spent practicing. They bicker with each other but Kosei learns to believe in his playing more and he also gets to know his new tutor more and through her what she thinks his mother's opinion would be of him now. He also spends more time with his male friend, so lots of character interaction. The volume finally ends with the gala which doesn't go as planned but Kosei gets to experience playing once more on a new level. This was a very quick read for me; I'm enjoying it very much. Quite deep for compared to any other shoujo I've read.