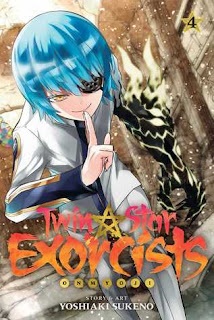 by Yoshiaki Sukeno
My rating: 4 of 5 stars

An intense battle volume. First part has Benio and Rokuro practicing the new attack they can work together. Then the big battle with Benio's brother takes up the rest of the volume. He taunts them and wants more than just to kill them. They are surprised to find how strong he is and Benio ends up making a life or death decision which changes her life forever. The action and seriousness is lightened slightly by the usual bickering and hidden feelings between the two exorcists. Good volume.