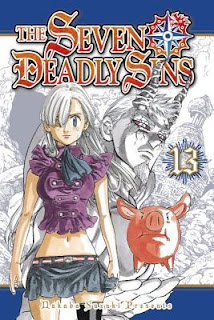 by Nakaba Suzuki
My rating: 5 of 5 stars

The whole first half of this volume is battle bringing about the end of the story arc we've been following since volume one. A major character finds hidden powers and one also dies (sigh!). A brief interlude to calm down and then the book ends with a cliffhanger as a new story and journey begin. Epic volume and turning point in the series!