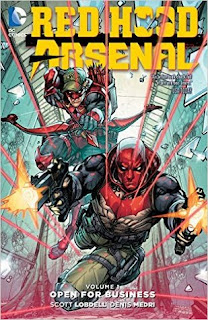 by Scott Lobdell
My rating: 2 of 5 stars

Not very impressed. I like Red Hood because of his angst and darkness and in this new Vol. 1, he's undergone a character assassination that I don't care for at all. He also appears younger, uglier and has a horrible new haircut. Roy is usually a fun character; here he's just a younger jerk. Not liking these two new versions at all. Good thing for newcomers coming to a volume 1 though, is that everyone is introduced as if you had never heard of them before. We are told Jason used to be a Robin over and over, ad nauseum. The book may start off with Jason and Roy teaming-up as a duo but by the end, they add a third partner again, with an unbelievable choice and one of my least favourite characters. The story isn't very strong either with a newly made rag-tag group of minor villains and an amnesia batman/robot batman episode.