Red's Planet: Book 1: A World Away from Home by Eddie Pittman 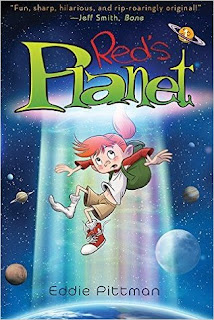 Red's Planet: Book 1: A World Away from Home

by Eddie Pittman
My rating: 3 of 5 stars

Another book following the current trend of girls going on adventures in space with cute sidekicks. This isn't as good as "Cleopatra in Space" or "Zita the Space Girl" but it has its own bit of charm. More than Red and her speechless cute big-eyed alien companion, I most enjoyed the rag-tag group of aliens who were stranded on the planet along with her. Their banter was funny and often realistic within an eclectic group found suddenly mixed together. The dad and his son stood out as funny, real characters with the blossoming relationship between the dad and the alien lady. I also liked the annoyed wildcat who seems to be in charge of the planet. However, Red, herself didn't stand out for me. Tawee, her sidekick, is cute but doesn't talk or make sounds, which diminishes his character. He'd probably work better in animation but Ben Hatke does much better with a wordless book in his "Little Robot". So, in conclusion, an ok book, certainly worth the read but more of the same of what's already out there of girls in space.