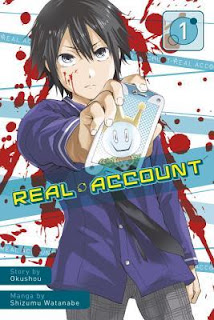 by Okushou
My rating: 5 of 5 stars

I like this! It's one of those books where people are pulled into a real-life version of an online game, a deadly version. Top gamers (approx 10,000) are pulled into the game everyone is hooked up to and their virtual lives become a matter of life and death. First, the nation is given 10 minutes to unfriend people in the game. Since "friends" will die with their contestant. A lot of contestants are weeded out and blow-up because they lose all their followers. The first game has everyone decide if they are hot, average or ugly then go before a group of judges hooked up to lie detectors. If you all agree you pass, if not you explode. This is gruelling as people have to deal with reality rather than their avatars. And finally, a bonus round to earn money by getting the most retweets in ten minutes. Should be simple enough since everyone has, at least, one follower but the reality here being that your real life followers may not actually be following you in real time. Those with no retweets explode. Pretty intense commentary on social media. The main character, Ataru, is standing out to be someone who will buck against this enforced debasement even though he has no "real life' friends, his sister being his only follower.