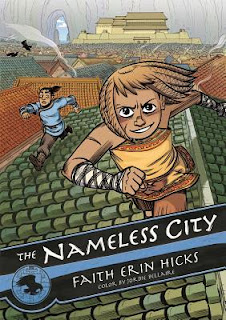 by Faith Erin Hicks
My rating: 5 of 5 stars

I eagerly await each time Faith Erin Hicks releases a new book and to see the word "Trilogy" on the title page made my heart skip a beat. What a treat! Hicks has taken her skills to an epic level, taking on the historic fantasy tale of a city besieged by oppressors in the Eastern tradition. This fictional walled city has been taken over and renamed so many times that it is commonly known as the "Nameless City". This first volume introduces the characters, gives us the background, sets up the intrigue and carries out an assassination plot which our main characters must thwart setting the stage for more political drama in the next volume. An easy book to read with fast action and Hicks signature style containing her characteristic subject's features. Pure delight! Bring on volume two!