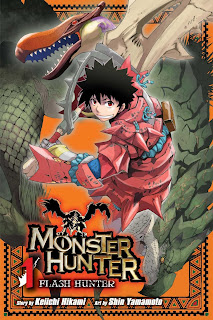 by Keiichi Hikami
My rating: 5 of 5 stars

I usually don't do well with manga (or graphic novels) based on video games but I loved Monster Hunter: Flash Hunter which is actually an adaptation of the novels. A typical quest type of fantasy I found this a lot of fun and comparable to Fairy Tail. Raiga, a novice hunter, finds his team disbanded and goes solo, but solo hunting is near to impossible, especially for a trainee so he sets off to find a partner. On advice, he is sent to Loc Lac along with Keres, an arrogant, serious hunter who takes an instant dislike to Raiga and later the two take on their first quest with Torche, a bumbling hunter who finds trouble follows her everywhere. They get off to a rocky start battling a wyvern, but by the book's end have formed a team. I enjoyed this a lot, liked its "Fairy Tail" resemblance, the noticeboard the hunters visit to choose quests from, the armour stats, and info on the monsters. This is a battle-packed volume but for a first, enough effort went into defining the three main characters to give us a good handle on their personalities and a bit of background as well. I've pre-ordered the next few volumes. This looks like it's going to be good!