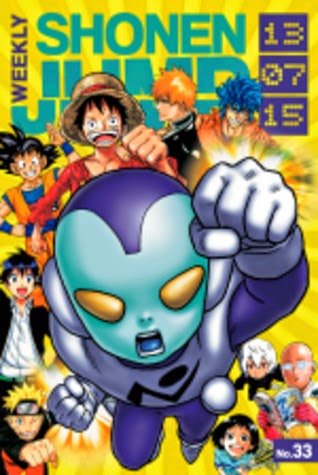 I'm jumping in with this digital magazine at this point. My son has a subscription and I just renewed it for him and decided to go back and start reading it. For a first ever (for me) issue it was pretty good. Combined together the ratings averaged out to a three. There are 10 "stories" represented here. I'm currently reading 4 of them, the other six I had never read before and of those six didn't know much about them to start with but hadn't even heard of two of them. I'm now currently interested in four of those new-to-me stories.


Jaco: The Galactic Patrolman - Ch. 1: Good start to a new series by "dragonball" author. Typical of his work. Only two characters so far, an alien with an attitude and a grumpy old man. Typical humour. (3/5)

Naruto #638: In full colour and absolutely gorgeous. However, I'm only on like vol. 9 of this series so I've jumped in here without a clue as to what is going on but this ten tails creature is awesome. (3/5)

Bleach #545: I love Bleach and I'm caught up to where the 3in1 volumes are but this is further ahead and I've got to figure out what's going on, but all the characters are the same and I felt comfortable dropped into this scene, though not much was happening. (4/5)

Toriko: Gourmet 241 - OK, I've never heard of this and I've been dropped into the middle of a battle. I haven't a clue what is going on, nor what it is about, but it has something to do with food and chefs. But, that battle was really cool, and the characters,, creatures' art is awesome. Am looking forward to getting to know this one. (3/5)

World Trigger Ch. 22 - I've heard of this title but didn't know what it was about. It sounds like one I'm going to really like. This was a good chapter to jump in with as it's not too far into the story and it seems to introduce all the characters and is a scene where the students are assigned their mentors and are taught how the "battle" system works to move up the ranks. I already like the characters and I like the art. (4/5)

Cross Manage Ch. 41 - This was short and I couldn't get much out of it. It's a sports manga about a girl's lacrosse team,. This chapter was about them losing a game a felt much more like shoujo. (2/5)

Nisekoi Ch. 81 - Bunch of girls clean a pool then go swimming but one is shy and awkward. More shoujo? (2/5)

One-Punch Man Punch 21, Part 3 - In full colour, quite short and totally wordless until the last frame. Huge robots, with people inside, flying around. Really just a teaser. Confusing but great art and did its job. Has me intrigued! (3/5)

One Piece Ch 714 - In full colour! One Piece in full colour! Yes! I'm reading this one but am waaaay behind this point so had no clue what was going on yet again. Only knew two characters but that a battle between the good guys and some ludicrous bad guys was going on was pretty easy to grasp. (4/5)

Draganball Saiyan Saga DBZ Ch 23 - Commonly known as Dragonball Z in N/A, I'm currently reading this and had read this chapter already. Brought back to mind some early stuff. I love DBZ soo much and this is full colour again. (5/5)