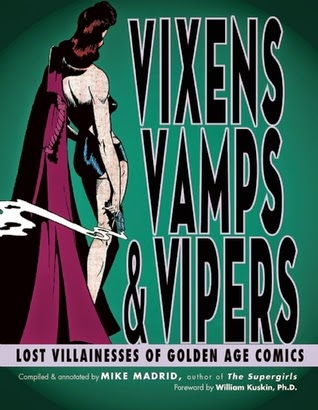 OCT 14 - Astounding look at female villains in Golden Age comic book history. Absolutely absorbing read! I've become increasingly interested in comic book history and am a newbie to work from this early period; so 98% of the comics discussed were new to me but my interest in them has been spiked a full 100%! Each chapter focuses on a certain type of villainess and starts with a lengthy commentary by the author/compiler which is then followed by several b/w issues of comics featuring several of the villainesses that have been discussed. All comics reproduced here are in the public domain, from the Golden Age, mostly from the 1930s & 1940s and all from before the Comics Code Authority of 1954. Absolutely fascinating commentary which had me intrigued and will have me reading further about the history of this time period of the comics industry. Th comics themselves, when read within the context of the commentary, were a pure joy to read. Mike Madrid manages to place them within their era, societal views and explains why the comics he's chosen are excellent examples of stories which gave women positive, empowering roles for the time in which they written. How they are typical of the time period, but also how these ones in particular were affirmative and ground-breaking. Chapter themes include: inherent evilness in women, the role of beauty (or lack of it) on women, positive portrayals of women of colour (black, asian, india, etc)and true-crime real-life female criminals.

I haven't read much from this time period before and found it very "out there". I thoroughly enjoyed the comics gathered here but do not think I would enjoy them as much without some type of commentary or annotation included as is presented here. I always thought that the Comics Code Authority was a joke and an overzealous, prudish product of the fifties but these comics here actually shocked me with the startling violence they contained. I mean it's nothing like today's blood and gore, but much more cold-blooded and surprised me with how it just came out of nowhere. There are scenes such as criminals blatantly turning around, shooting and killing police officers, a scene of a woman being hanged in the background, a little battle going on and then yikes someone is speared right through the body and another through the hand, another guy gets the ant treatment from natives: buried to the head in the ground, covered in honey and the ants go wild; later on someone trips over his skull. Maybe this doesn't sound so bad but taken in context, with the campy action, "clean" dialogue riddled with 30s/40s slang, it does come as shock when the coldblooded violence is so casual.

If you read my reviews regularly you'll know one of my favourite topics is true-crime and serial killers so I was fascinated with the last section which contained comics from the comic book "Crimes by Women" from the 1940s. These were pure exploitation comics but soooo fun to read. I did find myself looking up these lady criminals though and out of the 5 included could only find information about two of them (but they were pretty gruesome serial killers!). The stories weren't exactly true to life though so whether these other "crimes" were real or not I don't know but I may just look up this comic and read more from it and others like it.

Here are the two female serial killers covered I found: Bell Guness (very gruesome pictures) and "Shoebox Annie" Smith (took me a while to find her as this is an alias)

This author has previously written a companion book on heroines which I would just adore to read as well!