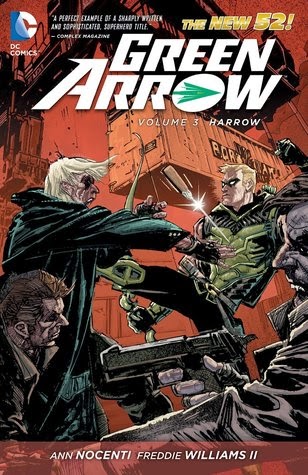 Again, I'm enjoying this way more than I had thought. I particularly enjoyed this because it is a crossover edition. Green Arrow himself has 4-issues compiled here sandwiched between 1 from "Savage Hawkman" and 2 from "Justice League". As we left the last volume, Hawkman had just come upon the scene, under attack and wanted for murder. GA decides to help the underdog in the situation and Arrow and Hawkman become partners for the first few issues which crossover between a Hawkman issue and Green Arrow issue. I liked this plot quite a bit as again Hawkman is one of those I've not read a lot of, especially from a backstory/beginnings point of view, and he and his team-up with GA intrigues me. Savage Hawkman has been cancelled already but since it only takes up two trades, I've added them to my reading list. Next story has Arrow messing up an arms deal for dealer Harrow, his young partner Pike and their pit bull protectors. Harrow is out for revenge on GA and this is a quick story that GA is involved in stopping the bad guys, nothing special but some good characters and at the end, he finally feels like he might have helped someone who is actually grateful. Then as the grand finale we go into Justice League issues 8 & 13 which I've read but are a lot of fun. I really enjoyed reading them again within this context. These are the two issues that Green Arrow shows up wanting to join JL and they don't like him and won't have him but Steve Trevor comes along at the end saying "come with me, I have another team I'd like you to join." If you are only reading Green Arrow you might find this volume a bit confusing but if you are into the New 52 universe, it was, as I said, a fun crossover volume.