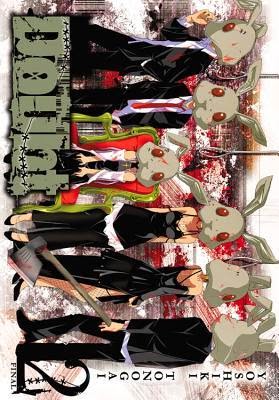 Well, all combined this series was a fine piece of psychological horror! Book two wasn't as good as the first, though still creepy, gross and scary, The game only has a few players left, with terror reaching it's pique immensely when only two are left, one of them must be the kill 9th wolf. So trapped in a warehouse of some kind, possibly an abandoned school or clinic, the teens join forces and try to capture the wolf, certain though it must be one of them. I'd say this volume doesn't have the same intensity of the first one. Still pretty tense, as I was scared to look round corners and concerned with who of the final three remaining would make it out alive. In book one I couldn't stop trying to figure out who the killer/wolf was and I was thrilled to find out that in the end I had been fairly right on target. However, this second book takes a bunch of twists and turns until it gets to the solution, so I was kept thinking I had been wrong. A pretty trippy mind-play, all things considered.