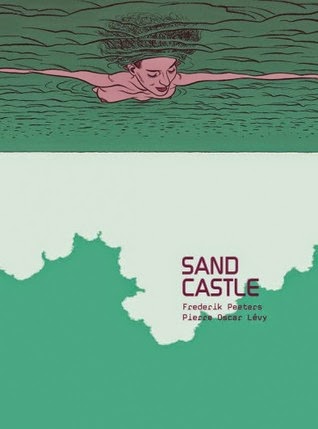 Sandcastle by Pierre Oscar Lévy; Illustrated by Frederik Peeters
My rating: 4 of 5 stars

May contain spoilers, though I've tried to keep it cryptic.

I'm going to start by saying I absolutely *hated* the ending which has brought my rating down to a four. Otherwise, up until that point, I was absolutely mesmerized with this book! Such a unique, gripping story and completely spellbinding. It's up to the reader to make sense of the story and figure out the meaning for themselves. The genre is either science fiction (which is actually mentioned in the story) or magical realism (an old myth/fairy tale is related to give this impression). The story comes full circle expressing to me the theme of people building walls around themselves, to protect them from the possible evils of life, but then only succumbing to a unfulfilled life that ends in death. I was greatly fascinated by the story, attentive to the end to find out what would happen. But was disappointed with the conclusion as I had really felt that the youngest boy's question about what happens after death was going to lead to a profound examination of death not being the end, or only the beginning or eternal life, etc. (I'm Catholic) I find these themes often come out similar to the Catholic view of death in many stories even when the author hasn't set out to do so. But instead, we got a silly abrupt, death is death, myth and an ending that shows life continuing but rather without any hope. The book is for mature readers as it does show full frontal nudity of both sexes, however it is in natural circumstances and not gratuitous at all. Certainly worth reading! Very well done.