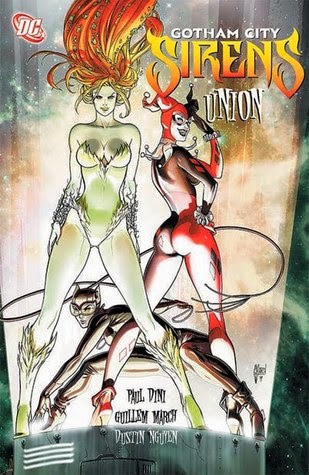 This is nothing serious but a lot of fun. Catwoman, Poison Ivy and Harley Quinn decide to become roommates because things are so unstable in Gotham right now and basically they are good guys, well at least they are fighting the bad guys. This takes place during a timeline I've never read before with Dick as Batman, though he only has a few appearances in this volume. Hush is masquerading as Bruce Wayne and since I haven't read the Hush series I'm vague on that background also but enough information is given that this was easy to jump into. Each issue is pretty much a stand-alone story though there is enough of a running thread to keep some continuity going. The girls find lots of trouble and end up going head to head with Boneblaster, bickering amongst themselves, the Riddler, the Joker, Hush and more human villains. The all-star cast also includes cameos by Zatanna, Damian Wayne, The Broker, Alfred and Talia Al Ghul. I loved the art; it is just gorgeous and these three villainesses are a perfect team-up.

View all my reviews
Labels: 2010 4* anti-heroes DC Comics superheroes YA