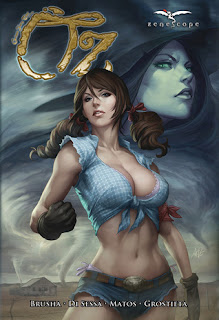 I'm a big fan of Zenescope's Grimm and related Universe tie-in's. I really like what they did with this retelling of the OZ story. This book covers the main theme of OZ as most people know it through the 1930s movie. Much has been changed that the plot hardly resembles the original and yet many key characters, events and scenes are included to pay homage to the original. My favourite character portrayed is the warrior Thorne, who is the last of his lion race. How he relates to the original "cowardly lion" is not revealed until near the end of the book. I enjoyed all the characters and as usual the art is very pretty from this publisher. The lead up to who the traitor in their midst is comes as a fine reveal. This volume is very toned down on the violence compared to many of the other books I've read, but that's not exactly saying much; it is still violent. One must be aware that Zenescope is a publisher that produces comics with a huge cast of buxom females attired in impossibly unrealistic garments that defy gravity. This is the escapism of Zenescope. If scantily, gratuitously clad females offends you, this publisher will not find favour with you. However, some people like their 50 Shades of Grey-type literature, me, I prefer the fun and beauty of Zenescope's titillation. Back to the book. The book ends having wrapped up the traditional Oz story but has left several threads open for a possible sequel to continue into new territory.