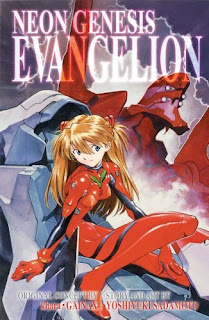 
"Once Shinji didn’t care about anything; then he found people to fight for—only to learn that he couldn’t protect them or keep those he let into his heart from going away. As mankind tilts on the brink of the apocalyptic Third Impact, human feelings are fault lines leading to destruction and just maybe, redemption and rebirth. "

No spoilers for this volume.  However minor spoilers from previous volumes can't be helped.

Vol. 7 - Can I just start my opinion of each volume with "Oh, Wow!"  Shinji is wracked with guilt but he takes on his father and quits!  Go Shinji! Meanwhile an Angel attacks and Mr. Kaji finds Shinji.  We're given Kaji's heartbreaking background and he fills us in on the final missing pieces of Misato's equally tragic background that has slowly been revealed through the last few volumes.  Shinji learns he is like these two and of course returns to Nerve.  Its a loosing battle for all the pilots until Shinji turns up then the Eva shocks everyone by becoming sentient and running on its own with Shinji inside.  Is he still alive or has he been consumed by the Eva?  The book ends with a peek at the next pilot that the (bad guys? Seele have in their possession.  Seems they are fed up with Shinji's dad too at this point but still find him useful enough to keep him around.  So some mystery still exists as to whether the dad is the user or is being used.  Very Interesting!!!  (5/5)

Vol. 8 - Stunning!  This volume concentrates a lot on the intrigue and secret agencies doings, both Nerv and Seele.  We are finally really understanding what is going on, but it's way too complicated for me to try to detail.  That's why you have to read it yourself!  This volume is full of reveals and surprises.  Another death of a major character and another one tries to murder another!  Wow, that was unexpected.  The weird story of Shinji's mother has pretty much been revealed and a kidnapping took place.  No battles this volume but who needs one with all that action!  BTW, I just love Rei!  Her character is developing so much; she is my favourite by far.  A page-turning volume!  (5/5)

Vol. 9 - Well the fifth child joins the team as the next pilot and he comes from Seele.  He's not human and we learn more about what makes him tick, understanding Rei much better.  However, something is changing Rei as she is becoming more human.  Nobody likes Nagisa and neither will you when you see the first thing he does! Asuka's mysterious background is pretty much revealed in this volume so now we know where her heartache stems from.  Lots of battle scenes where the new guy proves himself to be a superior pilot but Asuka is dangerously injured by a psychological attack from an Angel.  The new kid appears to be the new bad guy and the volume ends with another one of our characters in serious danger!  Is anybody going to be left fit to fight?  Bring on vol. 10!  (5/5)
Labels: 2013 5* manga robots science fiction viz media YA