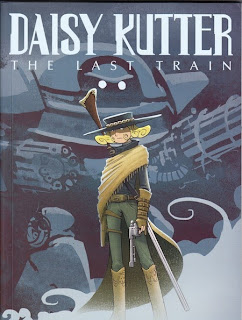 (US) - only available new from the publisher.

"Goodreads Summary: Daisy Kutter is a retired bank robber and legendary gunfighter who has decided to open a dry goods store in the small town of Middleton. The sheriff, her ex-boyfriend Tom McKay, tries to recruit her to join him on the other side of the law, but she isn't quite ready to move on.

When Daisy loses everything she owns in a high-stakes poker tournament, she is offered a job from the stranger who cleans her out at the table. He wants to hire her to rob his train. What's the catch? He believes his vaunted robotic security system will stop Daisy in her tracks, and he wants to prove it. If she succeeds in robbing the train, she can keep the gold and have her life back.. "

I am up to date with Kibuishi's Amulet series, read Copper and am not interested in any of his anthology series after trying one, so I checked to see if he had written any other stand-alone stories and was surprised to find this, his very first published collection.  This is a bind-up of the 4-issue series plus a short story "Phantoms" which takes place after the main novel.  This is fantastic and by far my favourite work by the author.  The art is wonderful, of course, done in a steely grey and white, with tones reaching up to black, the colour scheme fits the western steampunk alternate Old West reality perfectly.  The story combines a western love story, with a good ole train robbery and a steampunk robot reality with a western themed man vs machine showdown at the end.  Brilliant pacing and a spunky story with a tragic, yet bittersweet ending.  Bonus story "Phantoms" is a fun one and follows a gallery of the full colour comic covers.  Truly loved this and would like to see Kibuishi get off the anthology business and write more standalones.  He has a vivid and creative imagination.  One word of note about age appropriateness.  The library I received this from has it shelved with their children's collection and I most certainly found it a YA title,  not for juveniles at all.  There are no child characters, Daisy may look young on the cover but she has been in an affair for years and is of marriageable age.  Talk of "hookers" and swear words such as "bastard" and "prick" abound.  I believe the book is recommended for Young Adults by the publisher as well.