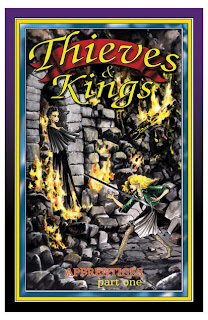 (US) - (available from publisher below)

"And then one day, she remembered. . . Leahanna had always been the most loyal and adoring of servants, her soul bonded throughout time to one half of the black sword pair wielded by the fearsome Shadow Lady. With this life she had been content. -Until the day the Black Swords were broken, her soul was cast free, and Leahanna found herself lost and confused. . . And very unhappy."

Sigh.... It's over... I just loved this volume.  The women (girls) have become so deep and each is now well on the way to finding their true self.  Each has a hard task ahead of them to realise the full potential they have inside themselves and it's not self-evident that all of them will achieve their best end.  Though at this point in the story each seems to be at grips with themselves.  Leahanna has an awesome anger episode throughout this volume which is one of the specific plot lines and parallels Kim's from Vol. 5.  A short book compared to the previous volumes and one that signifies a turning point in the plot now that Soracia is on a new track.  This book is called part one and the author's end note says to watch out for part two, but unfortunately that was in 2008 and in the meantime Oakley has published books from a new series.  I knew this when I started this volume so was prepared for the unfinished ending, yet it still stings to leave these fantastic, rich, characters hanging in infinity.  That's why I have to give this volume 4 stars instead of the 5 it deserves; because it has no ending.  There were also a few typos which had been hand-corrected which was startling since everything else about this series has been so professional.  Fans of the series must finish with this last book, even though you know that you're going to end on a high plot note feeling let down that there is no more.