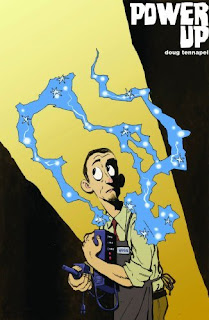 Power Up by Doug TenNapel

"The comedic story of Hugh Randolph, a family man down on his luck. He works as a mindless drone at a local printer until he discovers a mysterious video game console that gives him the power to produce endless riches, manipulate his work day, and even cheat death!"

This is a pure fun story from TenNapel that I can't help wondering if it contains a bit of biographical detail on how he got started with his "Earthworm Jim" character.  This stories features a game designer working on an "Earth Dog Jim" character.  Power Up contains all the usual elements of TenNapel's work but on a much lighter note; the strained father/son relationship is here, there is a Christian theme present thought it is below the surface and not as upfront and powerful as in other books of his I've read so far and the theme though light-hearted has a dark side.  Given the chance to use video game "power ups" in real life, this man becomes frivolous; he does make some good decisions but eventually more and more bad decisions lead to him facing the "boss" in real life and using the bomb power-up for real.  Thank goodness for extra lives and the"save from here" flag saves the day.  Doug's character mentions "Paradise" and "as close as we get to (it) on this side of death."  Makes one realize the frailness of life and how lucky it would be to get a "do-over", but since we don't we need to take the moments that we are given as they come to us and not waste our lives waiting for the right time for everything.  The story's video game angle will appeal to kids/teens but I think the story is better appreciated by adults as it is about a married man in a go-nowhere job and I don't think teens will relate to the adult characters and their adult worries.  This is the first book of Doug's I've read in black & white and I was a bit worried as his colour art is so bold, but I was delighted with how much one pays attention to his character's facial expressions in this media.  The faces stand out on every page.  I love this man's art and his capacity for storytelling.  This is not my favourite by the author but it's not my least either.  Fun!