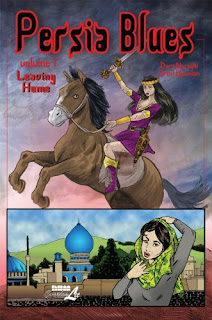 "Minoo Shirazi is a rebellious young Iranian woman, struggling to define herself amidst the strict social conventions of an oppressive regime, and the differing wishes of an overbearing father, in between life in Iran and life in Midwestern America. Minoo Shirazi is also a free-spirited adventurer in a fantasy world, a place where aspects of modern America and ancient Persia meld into a unique landscape. And yet, neither of these women are the true Minoo Shirazi.

At the intersection of guilt and freedom, family and self, ancient myths and modern enigmas, lies...Persia Blues."

An historical epic that alternates between the Persian Empire and modern day Iran.  Interestingly, the story takes place "here" in Persia and "there" in Iran.  This is an unusual set up for a book that takes place in the past and present and intrigues me with where it will go in future volumes.  Both stories are separate and feature brave women, one a warrior; the other stands up for her rights as a woman in a country where she could be jailed by the "morality police".  The women have the same first name and while the stories don't connect, there are some tiny hints plus some foreshadowing that the two worlds/women will eventually meet or connect.  I like both plot lines equally, at first I thought i was more keen on the Persian storyline, but over time became just as interested in the characters in the Iran plot.  Again foreshadowing is used here to let us know there is much tragedy we don't know yet about this family.  What can I say, loved the art, though the cover is not representative!  A nice presentation using shaded b/w art for the Persia scenes and simply b/w drawings for the modern Iran scenes.  In Minoo from Iran's story, a lot of background detail has been given and lead up to a point of a major life change.  I especially enjoy her character and would certainly continue to read this proposed trilogy.