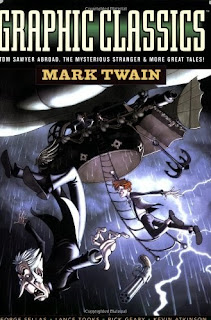 "Featuring an all-new comics adaptation:
• Tom Sawyer Abroad — Mark Twain's sequel to“The Adventures of Tom Sawyer” and “The Adventures of Huckleberry Finn”in a first-time-ever graphic novel adaptation illustrated by George Sellas
And returning from the first edition:
• The Mysterious Stranger - a celestial visitor befriends threeyoung friends in an adaptation by Rick Geary
• The Facts Concerning the Recent Carnival of Crime in Connecticut -Mark Twain confronts his conscience in comics byAntonella Caputo and Nick Miller
• Is He Living or Is He Dead?-a tale of artistic capitalism adapted by Simon Gane
• A Dog's Tale - an allegory stylishly adapted by Lance Tooks
• The Celebrated Jumping Frog of Calaveras County -Twain's famous fable, in comics by Kevin Atkinson
• A Curious Pleasure Excursion -a science fiction travelogue by William L. Brown
• Plus Mark Twain's Advice for Little Girls"


An interesting selection of stories by Twain which show his wide variety of writing styles; I only wish something from his travel writing was represented here to polish it off.  "Advice to Little Girls" is a satirical, pastiche which is found a verse at a time throughout the volume advising young girls on the best way to get rid of younger brothers, make mum think she's being paid attention to and not to smoke, drink or marry in excess, etc.  There is another satirical poem about promoting a grand tour excursion on the tail of a comet as it comes by just as if it were an ordinary train ride.  The Celebrated Jumping Frog is classic Twain as is Tom Sawyer Abroad though it strays off into the fantastical in the vein of A Connecticut Youth in King Arthur's Court.  It certainly does not contain the charm or seriousness of the original Tom or Huck.  The other stories I'm afraid rather brought me down and made me realize what an unhappy man Twain must have been.  His work here is called cynical but I must add bitter as that is all I felt from it.  I knew Twain was atheist but these stories : A Dog's Tale, The Facts Concerning the Recent Carnival of Crime in Connecticut and most pernicious of all "The Mysterious Stranger" show a very bitter, merciless, vitriolic man behind the pen.  A man with these qualities and such a clever, cunning wit is not someone I would have liked to meet in person, that's for sure!  A Dog's Tale got to me, if it really was about a dog and scientific experiments on animals, or was it a thinly disguised satire on the owners of black slaves as the artist pointed out and took even further to racial discord in the 60s, the Jewish Holocaust and the H-bomb.  Was Mark Twain making an early "Love not War" statement?  I truly enjoyed Is he living or is he dead as we finally had a story with a happy ending even though fraud had to bring it about, as some Robin Hood type of thinking was adhered to.  I'm not in love with Twain's outlook on life, in fact I hate it, but this comic is well illustrated and well put together.  My heart soared to see Rick Geary back for the diabolical Mysterious Stranger and Lance Tooks' rendition of a Dog's Tale was gut-wrenching.
Labels: 2007 4* anthology classics eureka productions graphic novel short stories