150. Wars in Toyland by Joe Harris 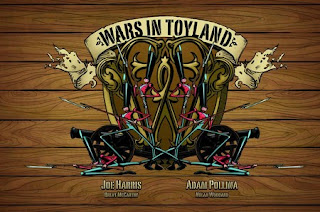 Wars in Toyland by Joe Harris. Illustrated by Adam Pollina.

"Toyland was once a place of wonder and beauty, at least until the teddy dictator Roxbury took over. After Matthew's brother and playmate, Alex, disappears, Matthew finds himself carried into Toyland by his own loyal toy soldiers. Matthew soon learns that Alex has been here, too – and is now being held captive by Roxbury. Leading an attack on the teddy bear's fortress, Matthew never considers that his brother might be beyond saving."


Received an egalley from the publisher through NetGalley.

This has a "Toy Story" feel to it, mind you more intense and not a little kiddies story.  Yet still it had that vibe.  A difference is that the toys come alive in their owner's presence to help him. Matthew's brother is a missing person and the toys know where he is, so they take him to Toyland where Alex has been kidnapped and taken over to the dark side.  It's a brief story that I just couldn't 100% get into; it rather predictably went where I expected it would. A pleasant diversion but nothing special.  I was enamoured by the artwork though.  Especially the scenes that have the wooden toy soldiers all lined up to do battle.  The artwork enhances and elevates the story, imho.  A bit scary and creepy so I'm keeping the recommended age for upper MG+ but some younger, who don't scare easy, will be fine with it.