203 . The Adventures of Blanche by Rick Geary 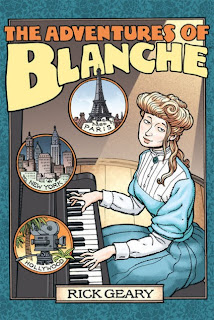 The Adventures of Blanche by Rick Geary.

Blanche begins her journey with a refined piano professor in New York, but soon finds herself entangled with a brazen portrait painter, subterranean societies, and shocking secrets behind the New York subway system. From there, she's off to Hollywood, where her stirring talents bring to light the labor movement's struggles with the motion-picture studios. Then, in Paris, after a pleasant ocean voyage, Blanche arrives to find a canceled concert tour, a murder, and mysterious old memories."


A compilation of three previously published short works, perhaps in comic format, though it is not made clear.  What a fun book and I'd love to see Blanche back in action. especially to see a conclusion to her story.  I had no idea what I was reading as my copy has the front flap giving a bio of Rick Geary and the back flap a list of his true crime series, while the back gives little summary of Blanche going on historical adventures in New York, Hollywood and Paris.  So it was with great excitement I read the first story finding out (supposedly?) that these stories are based on adventures of the author's grandmother and then with greater excitement I realized these stories were not all on the up and up.  Blanche's adventures are beyond the scope of reality, meeting up with the mythical, derring-do intrigue and mad scientists.  These three short stories were wonderful fun written in an historical "true" format similar to Geary's Murder Series.  As an ardent fan of Rick Geary, the artwork is just wonderful and as expected.  Though, I think I'll always love Rick the best when he is writing non-fiction, it is wonderful to see he has the imagination and can carry fiction just as successfully.
Labels: 1992 1993 2001 2009 4* dark horse fantasy historical fiction humour magical realism