151. Bluffton: My Summer with Buster Keaton by Matt Phelan 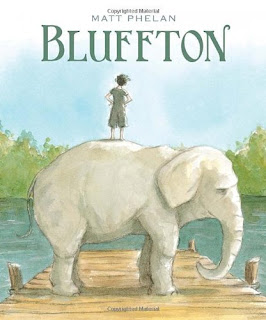 Bluffton: My Summer with Buster Keaton by Matt Phelan


"In the summer of 1908, in Muskegon, Michigan, a visiting troupe of vaudeville performers is about the most exciting thing since baseball. They’re summering in nearby Bluffton, so Henry has a few months to ogle the elephant and the zebra, the tightrope walkers and -- lo and behold -- a slapstick actor his own age named Buster Keaton. The show folk say Buster is indestructible; his father throws him around as part of the act and the audience roars, while Buster never cracks a smile. Henry longs to learn to take a fall like Buster, "the human mop," but Buster just wants to play ball with Henry and his friends. With signature nostalgia, Scott O’Dell Award-winning graphic novelist Matt Phelan visualizes a bygone era with lustrous color, dynamic lines, and flawless dramatic pacing."

I keep reading Phelan's books because they *sound* interesting and I like his art but have found the others just OK and didn't really expect to be reading him anymore, however the historical theme grabbed my attention once again and the Buster Keaton story pulled me right in this time.  I love reading about the era of the silent movies and ended up really enjoying this book.  The book is actually about Keaton's childhood in vaudeville before he became a movie star and is related through the eyes of a fictional character who spent his summers with him in a tiny town called Blufftown in Muskegon, Michigan where numerous famous vaudevillians of the time would come to relax for the summers.  We meet Buster as a kid from the ages about 12-14, though his paperwork had him as two years older to help get around child labour laws.  We learn what Buster was like, his interests and goals, he wanted to be an electrical engineer.  We see how he was an acrobat from toddlerhood and a natural comic playing his part he became famous for well before he hit the movies.  An enjoyable tale of childhood life in the early 1900s, the vaudeville experience and where Buster Keaton came from.  The book ends with a short essay from the author on both his interest in and the history of Keaton following the time frame of the book.  Personally, my favourite of Phelan's books to date.
Labels: 2013 4* biography candlewick press graphic novel historical fiction MG