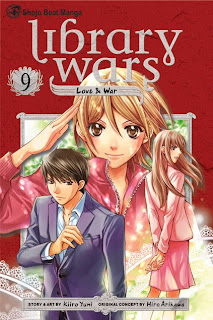 "There’s a groper in the library and Library Force members Iku and Shibazaki are sent in as bait! Iku’s undercover outfit makes her vulnerable…will she be able to defend herself if the pervert targets her? Later, Library Force members are required to take a test that involves reading stories to a group of rambunctious schoolkids. Coming from a big, unruly family, Iku definitely has the upper hand!"

.This series is so lovely but it annoys me that it is only published about twice a year.  Last volume was spectacular and volume 9 follows suit. The book starts off by quickly wrapping up the "groper" problem left hanging at the end of V8 then takes on a new direction.  Kasahara comes to a conclusion about her life which sets her relation with Dojo on a new grounding.  This is cute and explored throughout.  This book also gets back into some much needed story plot that does not revolve around the budding romance.  All our rookies are preparing to take the testing to move up in rank to Corporal and by the book's end a whole new case is in action when the Media Betterment Agency wants to censor a magazine article about an actor-idol when he uses the forbidden word "barber".  I'm glad we've got a plot going again because even though the romance makes me sigh, it is the futuristic censorship setting that first interested me in this series and I love when some action is going on.  As usual finishing this book left me feeling a big sigh of love for all the characters and one of dismay that while volume 10 is coming out in Aug of this year (2013), the next volume hasn't been given a release date yet making me think we'll again only get two volumes this year.  Love, love, love these characters!  They have developed so much since we first met them waaaay back in V1.
Labels: 2013 5* manga romance science fiction viz media